Black is happy! Watch the video 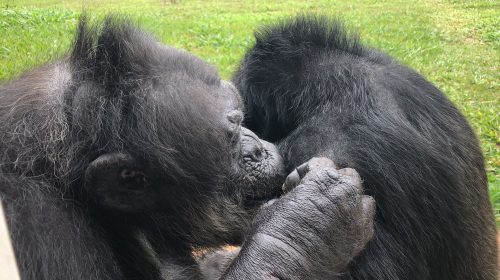 The approximate 50-year-old male chimpanzee Black was exploited in circuses when he was young and spent great years of his life at Sorocaba zoo, in the countryside of São Paulo state in Brazil. At the zoo he used to live with female Rita, who passed in 2011, and since then he was alone. Loneliness is a very stressful situation for chimpanzees… On May this year, after years of struggle in the Justice, Black was finally transferred to the Great Apes Sanctuary of Sorocaba, affiliated to GAP Project, where he lives in a wide enclosure and is not in exhibition to the public.

Luckily, his adaptation to the new routine at the sanctuary was better than expected and since September his life is even fuller. Loneliness is definitely past and he is sharing his enclosure with female Dolores. They play a lot, grooming, eat and sleep together… the best status chimpanzees in captivity after years of mistreating can enjoy. The sanctuary team and all the people who were involved in the process for his transference celebrate Black hapiness!