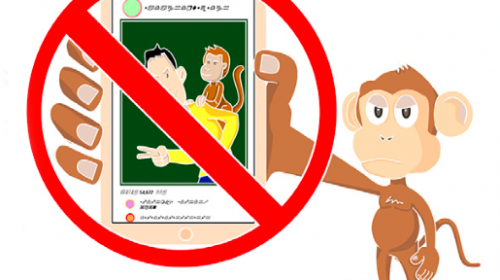 We’ve already talked about this subject and it’s always good to reinforce it. The way and type of primate photos posted on the internet and social media can negatively influence the message of conservation and protection, if the images are inappropriate or in the wrong context.

The IUCN – International Union for Conservation of Nature – primates/primate-human interaction specialists section recently released a document with basic guidelines. The document can be uploaded at https://humanprimateinteractions.wpcomstaging.com/wp-content/uploads/2021/01/HPI-Imagery-Guidelines.pdf. A brief summary is presented below:

Images of people with primates distort public understanding of primates

People holding or standing very close to primates give the false impression that touching them is not physically dangerous, poses no health risk to humans or primates, and that primates are suitable pets.

These behaviors can lead people to perceive primates as mere sources of entertainment and thus underestimate their biodiversity value and threat state, undermining conservation efforts.

While some cultures are separated from nature and tend to draw a clear dividing line between ‘humans’ and ‘nature’, or ‘wildlife’, many others do not, and people may not necessarily perceive primates as ‘wild’ animals .

Perceptions of primates also vary widely between rural and urban residents, for example. Therefore, the message one wants to convey with an image from the perspective of one culture or region may not be the message people receive in another.

Images of veterinarians, caregivers, wildlife entertainers, celebrities, or volunteers petting or feeding primates in rehab centers or sanctuaries generate a desire to do the same. Photos and selfies close to wildlife have become a popular way to capture, share and validate travel experiences.

These images undermine messages to combat hunting and trade of wild animals as pets and conservation efforts, as the contact between humans and primates within rescue centers, sanctuaries and NGOs can be misinterpreted out of context.