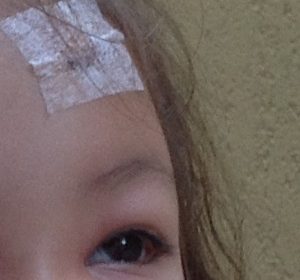 The child had to take four stiches in her forehread (UOL)

The scandal caused by a stone thrown at a child who was in her father’s lap in front of the chimpanzee enclosure in the zoo of Belo Horizonte is showing the tragic reality of the exposure of large primates to an unprepared public.

If you look at the video of the accident, the father had the child in his lap, a few meters from the grounds of the chimpanzees’ enclosure without grid, which separate them from the public with a lake. The chimp threw a piece of brick, which struck the girl’s head and then hits the face of her father, and both fall back.

The blame for all this is the absurd insistence of the Municipality of Belo Horizonte to use the great apes zoo to amuse the public, in areas that have no protection both for the primates and for the public. This piece of brick thrown by the chimpanzee is an Act of Protest for the life of slavery and exploitation that is led there. He was not joking, he was furious.  And the only way to show their protest was doing this. If he escaped, undoubtedly he would have killed that child and her father, who are the representatives, for chimpanzees, of the humans who keeps them like prisoners and on exhibition.

Belo Horizonte Zoo is in the headlines very often, with the loss of important animals, such as gorillas and big cats that died prematurely there, as well as with the transmission of visceral leishmaniasis (fatal disease ) between infected animals and the visiting public. The Zoo is located in an endemic area of leishmaniasis and visitors contamination cannot be ruled out, as happens among animals that live there .

The only ethical and correct solution is to close the zoo for public visiting and its conversion to a rescue center , which the state of Minas Gerais is much needed to accommodate its fauna that has no appropriate place to be located.