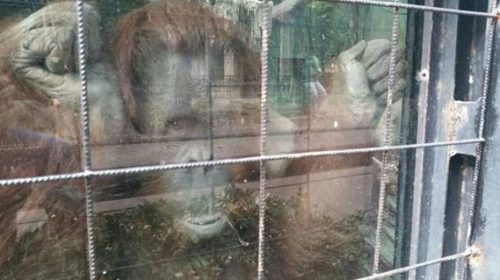 After several months of management, and in view of the documentation required for the transfer of the orangutan Sandra to the Great Primates Sanctuary of Sorocaba (Brazil), on July 10, 2017, Dr. Elena Liberatori, the Judge of Litigation, Administrative and Tax No. 4 of the Autonomous City of Buenos Aires (Argentina), “momentarily” rejected the request for release of the primate requested by the “Association of Officials and Advocates for Animal Rights” (AFADA), under the unfounded and solitary argument that the Brazilian Sanctuary “does not have personnel with experience, nor training in the management of orangutans”.

The Judge is the same one who, in October of 2015, declared the orangutan Sandra as “subject of right” and put a picture in her office in August of 2016 whose legend read:

“We decided that she should be born captive; That she was a hybrid being, neither from Sumatra nor Borneo; We decided that her life would run between cement walls and grids, without other orangutans, without trees or fruits, nor the sounds of their natural habitat, in the noise of this city. We robbed her dignity of life. Sandra. Sorry. “(Elena Liberatori, Your Judge).

NGO AFADA, supported by the PGS, appealed the decision of the Magistrate on July 13, 2017. Among their arguments, the lawyers said that the resolution was self-contradictory, illogical and lacked adequate reasoning.

In this reasoning, they highlight that the “argument” used by the magistrate to reject orangutan Sandra request to be transferred, claiming that the “Sanctuary of Sorocaba has no orangutan specialists”, had no logic, since in the place where Sandra has been (Ecoparque Porteño) since 1994, for more than 22 years, “there is no orangutan specialist”, not even in great primates; And that, who is in charge of the supervision and clinical care of Sandra currently in Ecoparque Porteño is the veterinarian Guillermo Wiemeyer, who is equal – neither more nor less veterinarian – than Dr. Camila Gentile, of the Sanctuary of Sorocaba, and has no title, diploma or is specialized in orangutans or in great primates.

The difference between the professionals seemed not to have been warned by the court that “the Sanctuary veterinarian has the necessary and adequate knowledge for the Management, clinical evaluation, surgical interventions and anesthesia (among other numerous “practical experiences” with great primates and not only with chimpanzees and orangutans), as proved in the case, with the CV of the professional mentioned and, with her 12 year old experience taking care of more than 50 chimpanzees in the Brazilian Sanctuary; On the other hand, this has never been corroborated by the veterinarian or other professional from the former zoo of Buenos Aires (and / or current Ecoparque).

AFADA also reminded the magistrate that she “had to remember the poor background of the former zoo in Buenos Aires and the sad story of the three German orangutans (Sarah, Timo and Connie) in 1998, who died shortly after entering the zoo; Knowing that these deaths did not occur precisely because of “natural causes”, but due to mistakes made in the handling and precariousness of the enclosures, destined to these specimens, in the ex Porteño zoo, whose investigation is in full judicial process in the “Fiscal Unit Specialized in Environmental Matters (UFEMA) of the Fiscal Public Ministry of Caba, Argentina.

The animal rights lawyer also objected to the “hurry” of the Judge in taking her decision, which did not take into account the “tacit agreement” between AFADA and the authorities of Ecoparque and the Sanctuary of Sorocaba to accept the “request of transfer of the orangutan, which was clearly reinforced by the recent visit of Ecoparque veterinarian Guillermo Wiemeyer to the Sanctuary’s facilities on July 6, 2017.

Along the same lines, AFADA also questioned Judge Liberatori “for having taken an isolated and unfounded decision, without taking into account the last technical report of the Argentine experts, presented in the judicial process, in which it was stated that “Sandra was in a position to be transferred to a larger three-dimensional space, without mentioning in any way the argument that the Judge invoked, to reject the transfer, that is,” lack of specialists in orangutans, within the Brazilian Sanctuary.”

The lawyers pointed that if the argument was made for the “lack of orangutan specialists in the Sanctuary,” used by the magistrate to reject Sandra’s transfer to Sorocaba, the Judge should have applied the same reasoning to Ecoparque Porteño, which also had no Professional Special skills and / or qualifications about the species, thus demonstrating that the Judge’s “legal excuse” had no logical or legal basis of true value.

Finally, the appeal made clear the existence of a “consensus” between the parts of the case, referring to the fact that Sandra could not be in the enclosure where she lives in Ecopark, and the imminent need to transform it or to send the primate to a Sanctuary urgently, “knowing that Sorocaba has offered a place of dreams (which any Sanctuary would not be willing to resign), while the current Ecopark seems to be more concerned about the upcoming “electoral rallies” than about the primate welfare.

In its conclusions, AFADA asked Judge Liberatori to revoke the resolution and adjust its decisions to the law and evidence of the cause, reminding her of the “greatness and courage that every man and woman of law should have, when his or her will depends on the life of a sentient being. ”

” … Sandra is a fish out of water, he is an arboreal animal in a stone enclosure. ” (Aldo Giudice, specialist in the Sandra case)