Argentina / Chimpanzees: what will happen to the five individuals who live in zoos in the country? 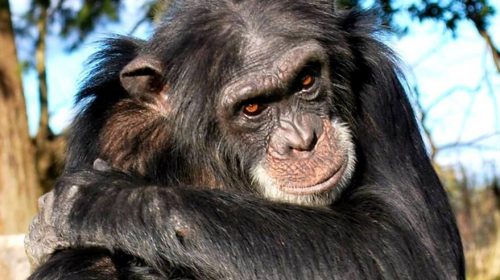 Johnny, the captive chimpanzee at Luján Zoo, in a promotional photo of the place (La Nación)

They share more than 90% of chromosomes with humans; there is a specimen in captivity in Luján, another in Río Negro, another in La Plata and two in the Capital

The chimpanzee is the closest relative to man. We share more than 90% of our chromosomes with them. In Argentina, as far as is known, there are five specimens in captivity. Johnny, the eldest, lives alone in a cage too small for him at the Luján Zoo, which is currently closed. He is 53 and, if no urgent action is taken, he will face the same fate as Sharima, the elephant who died in January on the property, sued after a complaint from the Ministry of Environment. Due to long-standing disagreements, the elephant, as reported by Elephant’s Helpers Argentina, could not be treated in time by a specialist who could accurately diagnose her illness and do something to save her life.

Jorge Semino bought the Luján Zoo in 1994 from Jorge Cutini. But these were other times, when animal collectors exhibited themselves with tigers, lions and monkeys on television programs or parties, and rented them for advertisements or movie scenes, among so many other activities. Today society has changed. The reality of chimpanzees too? Johnny arrived from Germany as a baby, probably having been removed from his mother, a victim of the illegal primate trade, which still persists in Africa and in the world. He spent his first years of life in Cordoba at the hands of an eccentric German, who drove him in his car and attracted attention.

It is not known why he was sold to the famous circus Tihany, whose owner was also German. Johnny learned tricks and walked among people dressed as his closest relative, the man. When he got big and with the decline and prohibition of circus shows with animals, he stopped serving to entertain. Then he was taken to the Luján Zoo. Little is known about his past. There is a great silence and mystery around many of these primates in our country. The truth is that there was a time when this adult chimpanzee had a partner who, it is known, lived in the home of an eccentric woman. Cali, as she was called, was served by three people, who took care of her desires. From there she went to Johnny’s cage and, a little later, died.

Watching a chimpanzee from a distance, who has been specially trained to dress and move like a man, is a moving experience, to say the least. Much more if you are behind bars and alone. The species not only shares chromosomes with us, but also many of our customs. One is that they suffer from loneliness as much as we do: sometimes they can change families or groups, but they need to live with other individuals of their kind. Not with anyone, of course; they choose some and reject others, like us. Today, Johnny, behind bars, prefers croissants to bananas, which he peels neatly in the same way that humans usually peel. When the zoo was still open, if the public demanded it, he repeated the shows he remembered from the circus or was showing off and puffing his chest around the cage. And when he got excited, he started to swing on the trapeze that is hanging on the metal structure that supports his cage and hit the bars. It is so strong that you have a feeling that they are going to break.

With time and frustration, Johnny became aggressive and no one can enter his cage anymore. A chimpanzee has the strength of three people and can kill anyone in three seconds. Today there is no more public at the zoo, and the few remaining employees are reportedly bringing food from outside for him, hoping that the Justice will resolve his situation. With the time of Justice and considering that, also by law, Johnny, like all other animals, is considered a “thing”.

In contrast, our country has the first case of Habeas Corpus to a primate in the world. The lucky one was the chimpanzee Cecilia, from the Mendoza Zoo. “It is a more important decision than Sandra, the orangutan of the Ecopark in Buenos Aires, who was declared a non-human person and thanks to that she regained the right to be free”, says Mariana Caram, responsible for the conversion of the zoo into an ecopark and who has worked with many of the transfers that were made there. “Habeas Corpus is a legal resource used by human beings. It is the first worldwide case in which this legal remedy is recognized for a non-human person. Judge Alejandra Mauricio, from the Third Guarantee Court of Mendoza, came to the zoo, assessed the situation and asked if Cecília’s transfer was possible. When we said yes, she issued Habeas Corpus in favor of her, ” she recalls. Cecilia was born in 1996 at the zoo. “In 2014, the last three were left. Charlie died on July of that year and Xuxa, Cecília’s sister, in January 2015. She was alone and went into depression. We feared for her life. Then the actions to get her out of there intensified ”, she concludes.

Tomy is the last chimpanzee remaining at the La Plata zoo, closed to the public two years ago, after the death of the elephant Pelusa. He was three and a half years old, too young to be separated from his mother. Chimpanzees can live with their mothers for ten or more years, and it is their mothers and their family group that teach them everything. Upon arriving at the zoo in La Plata, Tomy chose his caretaker, Martin Davis, as his foster mother, who took care of him, taught him how to play, how to fetch food and gave him the emotional support he needed. Today, although Martín has not worked at the zoo for ten years, he tries to create a foundation to save him, visits him twice a week and even thinks about the possibility of retiring to a sanctuary with him. LA NACION contacted the zoo in La Plata to find out what plans they have for the chimpanzee, but got no response.

Toti lives alone in Río Negro in a large enclosure and, although the Justice denied him Habeas Corpus, it is also expected – as in the case of Johnny – that its owner will agree to give him a better life in his later years and agree to transfer him to a sanctuary, like Cecília, who today in Brazil has been integrated with a companion again and will spend the next years as she always should have been.

On the other hand, Kangu and Sasha, the last two chimpanzees from Ecopark Buenos Aires, already have a possible destination. After the death of Martín, the oldest of the three, who was unable to travel because of his age and weak heart, they will also be transferred to Brazil as soon as the pandemic allows. Will we arrive on time with Toti, Johnny and Tomy, who have lived alone for years, hoping to have access to a life more similar to their origins?