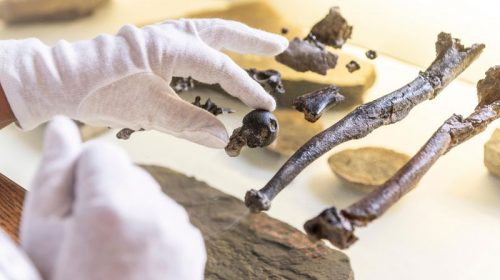 The Danuvius fossils, including bones belonging to at least four individuals, were discovered in a clay pit in Bavaria.Credit: Christoph Jäckle

The fossilized remains of a newly discovered species of ancient ape suggest that it might have been able to walk on two feet, millions of years before the first humans appeared.

The finding challenges the accepted idea that bipedal walking evolved much later in the ancestors of modern humans, and that having a skeleton adapted for regularly moving around on two feet is a unique and defining feature of hominins, the evolutionary group to which we belong. Not all researchers agree with the conclusions, however, and it is not yet clear where the ancient animal fits in the ape evolutionary tree.

The newly discovered ape — named Danuvius guggenmosi — lived in what is now Germany 11.6 million years ago and is described in Nature on 6 November1. The fossils show that although it had long arms suited to hanging in trees, features of its legs and spine suggest it might also have been able to move around on its hind feet.

If this conclusion is widely accepted by scientists, it could shed some light on how — and when — bipedal walking evolved, which is currently a mystery. The 4.4-million-year-old hominin Ardipithecus ramidus was clearly bipedal2, and there are hints of bipedalism in some species that are between 6 million3 and 7 million years old4. But D. guggenmosi seems to suggest that walking on two feet evolved before the hominin branch of the evolutionary tree split from the branch that includes modern chimpanzees and bonobos, which happened roughly 7 million years ago.

“What makes things really complex now is, what defines hominins if not habitual bipedalism?” says palaeoanthropologist Madelaine Böhme at the University of Tübingen in Germany, who co-led the research. “Our paper may create a dilemma for the definition of hominins.”

Böhme, together with David Begun at the University of Toronto, Canada, and their colleagues, uncovered several D. guggenmosi bones belonging to at least four individuals in a Bavarian clay pit. The fossils include thigh, shin and lower-arm bones, as well as several vertebrae and hand and foot bones.

The vertebrae and leg bones in particular suggest that D. guggenmosi moved around on two feet. For instance, the shapes of some of the vertebrae suggest that the ancient ape had a long and flexible lower back, a feature that allows modern humans to stay balanced while walking upright by pulling the weight of the torso over the hips. D. guggenmosi also has several weight-bearing adaptations in its knees and ankles, which would make sense if the ape routinely supported its full body weight on its legs.

But D. guggenmosi’s strong arms, and hands and feet that would have been able to grip branches tightly, led the researchers to conclude that it probably lived in trees, and had a unique way of moving around: a combination of walking on two feet and hanging on its powerful arms that they dub ‘extended limb clambering’.

This conclusion makes sense, says Jeremy DeSilva, an anthropologist at Dartmouth College in Hanover, New Hampshire, who was one of the paper’s peer reviewers. All the ingredients for bipedalism are there, he says. “This is going to stir the pot in such an exciting way. There’s going to be so much research that’s stimulated by this paper.”

Others are not yet convinced. Scott Williams, a palaeoanthropologist at New York University, says not enough of the D. guggenmosi spine is preserved to be sure that the ape had a long, flexible lower back.

And Sergio Almécija, a palaeoanthropologist at the American Museum of Natural History in New York City, says it is difficult to work out how apes move just from studying the bone shape. Last year, for instance, he and his colleagues discovered unexpected diversity in the way mountain gorillas position their hands while walking on all fours5. “The problem becomes even more challenging when [dealing with] fragmentary and deformed fossils,” he says.

The latest study comes a few weeks after a separate research team, which Begun was part of, described a 10-million-year-old pelvis belonging to another ancient European ape, Rudapithecus hungaricus. Features of the pelvis implied R. hungaricus also had a long and flexible lower back, indicating it too might have been a tree-dwelling biped6. This raises the possibility that today’s knuckle-walking chimps and gorillas evolved from a bipedal ancestor, and that modern humans might have inherited bipedalism directly from animals such as D. guggenmosi.

But David Alba, a palaeontologist at the Catalan Institute of Palaeontology in Barcelona, Spain, cautions against seeing D. guggenmosi’s way of moving as a precursor to our walking style. That, he thinks, is “too specific and might be an overinterpretation” — particularly given that Böhme and Begun’s team has not yet conducted an evolutionary analysis to determine how, or whether, D. guggenmosi is related to hominins.

DeSilva says that it would be unwise to assume a direct line of descent, because D. guggenmosi is much older than the earliest known hominin fossils. But the discovery of D. guggenmosi is important even if it turns out not to represent a staging post on the path to hominin bipedalism, he says, because that would suggest apes evolved bipedalism more than once. D. guggenmosicould then provide clues about the kinds of conditions that encourage apes to walk on two feet.