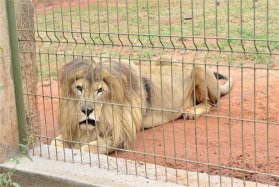 Americana  Zoo, in the countryside of São Paulo state,  has the same administration for a decade and  still suffers from the same problems , perhaps now even more acute by the lack of money.

According to local newspaper O Liberal, the zoo has a debt of more than 3 million dollars with suppliers and the food needed to feed a large population of animals is waning.

Lion Panta (photo)  represents the crisis that affects this Zoo , as dozens of others across the country. The story of Alemão , a chimpanzee who  ended up dying on Sorocaba Zoo , after he had  no more chance of surviving in the Zoo  for having lived for years in a tiny island of American, ios being repeated?

At that time,  when Alemão became ill, he disappeared from  Americana Zoo and appeared on treatment at Sorocaba Zoo , where he died days later .

Does Panta lion will have the same fate? He is not in his enclosure and it is said that he is in treatment. They do not want him to be photographed again with the look of death in his body . Will Sorocaba Zoo also be his final destination?