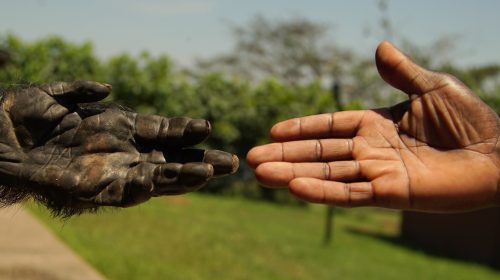 In 1925, the American psychologist and primatologist Robert Yerkes published his book Almost human, arguing that the similarities between humans and chimpanzees would make chimps good objects for scientific study.  In Almost chimpanzee, Jon Cohen explores how different our two species are, and what that might mean for our relationship with chimps.

In 1863, in his Evidence as to man’s place in nature, Thomas Huxley asked “Is man so different from any of these Apes that he must form an order by himself?”  Taxonomically chimpanzees were classified along with gorillas and orangutans as Pongids, while humans were classified as Hominids.  With DNA analysis we now know that Huxley was right, humans are more closely related to chimpanzees than either species is to gorillas or orangutans.  Much has been made of this close genetic relationship; a quick Internet search will throw up a range from 96% to 99% of DNA shared by chimps and humans – I own a t-shirt saying I am 98.7% chimpanzee.

Humans haven’t always been comfortable with having close chimpanzee relatives; as well as advocating for chimps to be used for research, in Almost human, Yerkes tried to counter the revulsion people felt for chimpanzees, the view that they were “inventions of the devil.”  This negative view might have arisen in part from feelings similar to the “uncanny valley” phenomenon of robotics and virtual reality – humans being creeped out by beings that look imperfectly like us, but it was also related to the increasing acceptance of Darwin’s theory of evolution, and the discomfort some felt with ‘just’ being part of the animal world in general and related to chimpanzees in particular.

Since Yerkes established his Primate Laboratory in the early 1920s, there have been many scientists and researchers who have argued for better treatment of chimpanzees in laboratories, in zoos, in captivity and in the wild, and against their use in invasive research.  High profile authors such as Jane Goodall and Frans de Waal go further, advocating that chimps don’t just share our DNA, they share our ability to view the world with self-awareness, compassion, Machiavellian strategizing, and a sense of awe and wonder.

This emphasis on the similarities between chimps and humans has been a double-edged sword for the chimps; as well as a reason to treat them with special regard, the kinship between humans and chimps has been used as a rationale for invasive research for human benefit, keeping chimps as pets, displaying them in zoos and circuses and eating them to absorb their power or fecundity.  The commodity value of chimps outside of their territories has on the one hand made them attractive for poaching, and on the other, according to Emily Otali, Field Director of the Kibale Chimpanzee Project, Uganda, made it difficult to enlist local support for chimp protection as: “People look at chimps as belonging to the white people.”

Cohen questions the narrative of ‘closeness’ and looks at many aspects of the human/chimpanzee relationship. He visits chimps in the wild, in labs, in sanctuaries, and talks to researchers in many disciplines in many countries.   He states he has ‘no agenda’, and he talks of how valuable chimps are as research commodities, as well as presenting the views of those who believe that chimps deserve special regard.  He describes the medical breakthroughs that have led from research on chimps but doesn’t shy away from the suffering that was endured during that research.  And the suffering of chimps isn’t confined to those in captivity; his interview with Otali includes horrific descriptions of the snaring of chimps in Kibale.

Cohen includes a lot of detailed science; blood work, DNA, hybridisation, theories of evolutionary development, genetics, evolutionary theory, medical science experiments, space science experiments, morphology.  And he discusses the chimpanzee language experiments and those looking at ‘theory of mind’ (i.e. the ability to infer the mental states of others).  It is primarily in these areas where some researchers believe genetic and morphological similarities do not lead to ‘inner life’ similarities. In the words of Daniel Povinelli: “just because we look alike does not mean we think alike.”

Cohen criticises Goodall (at one point he refers to her as ‘Saint Jane’) for embellishing some stories to emphasize the inner life of chimps: “Goodall twists the facts to serve the moral of the story she wants to emphasize: more and more people are recognizing that chimpanzees are almost human, and they should be treated with similar respect, dignity and concern.”  This is criticism of Goodall’s use of information to try and gain wide public support for chimpanzee conservation, not of her research.  There is a wealth of research that would counter Cohen’s view in Almost chimpanzee that chimps don’t just lack a ‘theory of mind’, they have in fact ‘mindblindness’, such as people living with autism do who “have difficulty understanding the wants and beliefs of others.”

Cohen sides with the sceptics in discussions of the chimpanzee language experiments and ‘theory of mind’, and a large part of this scepticism hinges on a supposed lack of ability in chimps to teach.  Psychologist David Premack is quoted as saying: “chimpanzees would not evolve a language for a simple reason: they do not teach one another, which is how human children develop vocabulary.”  And in the context of ‘theory of mind’ Premack says: “Chimpanzee mothers do not recognize that their infants lack knowledge and cannot, therefore, crack nuts with rocks. … Therefore they do not teach them.”

Cohen mentions the inability to teach throughout the book: “chimpanzees do not teach each other anything.”  At one point he does grudgingly allow “Could it be that there are [chimp] behaviors that lean towards instruction but do not qualify as teaching?”  But chimpanzees do ‘learn’, de Waal in his 2019 book Mama’s last hug observes: “We know from a wealth of research that young chimps learn from their elders not only what to eat and what to avoid but also how to access hard-to-reach foods. They learn how to fish for termites, crack nuts, and collect honey from beehives” (p. 159). Cohen mentions Washoe, the first chimp to learn some American Sign Language (ASL) signs, but doesn’t discuss Loulis, her adopted son who learnt some ASL signs from Washoe.  Learning by imitation is still transmission of knowledge and skill, employed by humans as well as chimpanzees.

In Almost chimpanzee, Cohen sets out to look at the differences between chimps and humans and ends up by being sceptical of chimps having a rich inner life, because that life is not the same as that experienced by humans.  Most of the experiments on chimpanzees are aimed at learning more about humans or trying to gain benefit for our species, and therefore many of our judgements about them are based on comparisons with us and our human abilities.  Chimps may not be ‘almost human’ but they are entirely chimpanzee, and that alone, not their similarity or ‘use’ to us, should be reason to protect them and allow them to flourish.

I think Cohen would agree that even though he sees a marked discontinuity between chimpanzees and humans, they still deserve special regard and protection.  In a lovely touch he ends his book reflecting on his visits to Geza Teleki, a primatologist who was beyond caring if chimps were similar or dissimilar to us, he just wanted them left alone.  Teleki’s life was changed one evening at Gombe National Park in Tanzania in the late 1960s, when he observed two chimps greet each other and sit together to watch the sunset (described in his essay They are us in The Great Ape Project (1993)): Teleki said “I had seen my species inside the skin of another.”  Cohen quotes Teleki trying to put into words the experience of being in the presence of chimpanzees and how “… there is no animal anywhere in the world where I’ve experienced what I’ve experienced with a chimp.”  Those who have felt this connection understand, and Cohen himself relates a similar experience he had when he was amongst chimpanzees in the wild and having the feeling that he was “almost a chimpanzee myself.”

Almost chimpanzee is an extensive overview of human/chimp relationships, however there are some omissions, particularly around research on chimpanzee culture.  The book is a good addition to the growing body of popular work on chimpanzees, and the more information out there on these wonderful animals the better, as there is no getting away from the fact that, as Cohen says, “Humans will determine the fate of chimpanzees. Chimpanzees of course will have no say in the fate of humans.”

*Alyson Baker is a Librarian from Nelson, New Zealand.  She has always been interested in wildlife and is appalled not only by the predicted rapid path to extinction of so many animals, but also by the way many of them are treated, especially chimpanzees, our closest relatives.  Alyson volunteered at the Ngamba Island Chimpanzee Sanctuary, Uganda in 2017.  She returned to Ngamba in 2018 and also went chimp tracking in Kibale National Park, and is planning to go back to the sanctuary and visit Budongo Forest Reserve next year.