Africa: He lost his mother, then his arm 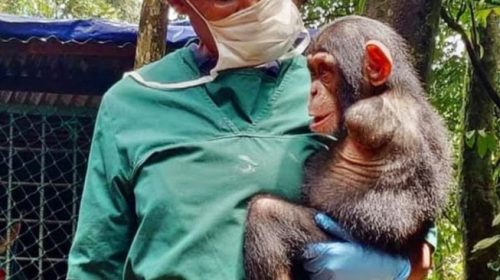 Young chimps need space to play. Especially Julius, the two-year-old chimp with only one arm. But because Tacugama Chimpanzee Sanctuary recently rescued a shockingly high number of 23 orphans from the cruel wildlife trade, the nursery where Julius plays is bursting at the seams.

Julius needs a safe enclosure to recover and gain strength after the death of his mother and the loss of his arm.

Although little is known of his history, Julius is a critically endangered western chimpanzee whose parents were likely killed for bushmeat. Unable to survive on his own, he was found in Sierra Leone where PASA member Tacugama coordinated his rescue.

Seeing his precocious personality and strong body, Tacugama staff were hopeful that Julius would eventually rebound from the profound trauma he experienced.

Sadly, Julius had more heartache ahead of him. In August, he was seriously injured by an adult chimpanzee. Because of severe damage to his left arm, the only option for the Tacugama medical team was to amputate.

Expert care from Tacugama staff is helping Julius to recover from the amputation of his arm.

Julius is now able to rejoin the other youngsters, but with so many recently rescued chimps in the nursery, his rehabilitation is challenging. Tacugama needs to triple the size of the chimp nursery, fix wooden poles that are weakened from constant moisture and rains, and repair doors and crumbling cement.