Add Ham & Enos to the U.S. Astronaut Hall of Fame 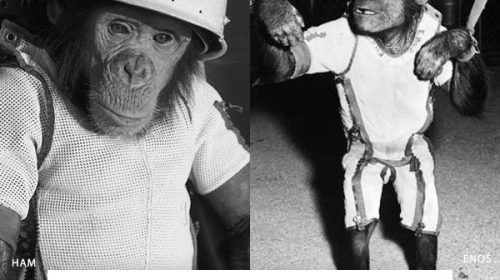 From Save the Chimps

Jan 31, 2021 marks the 60th anniversary of Ham’s flight into space – let’s honor him by getting Ham and Enos inducted into the Astronauts Hall of Fame in 2021.

As unwilling participants, they paved the way for space exploration.

Sign this petition to urge the Astronaut Scholarship Foundation to add Ham and Enos to the U.S. Astronaut Hall of Fame.

Save the Chimps honors Ham and Enos, their courage, and their unwilling sacrifice. The Space Chimps, or “Astrochimps,” hold a special place in the hearts of everyone at Save the Chimps. It was the plight of the Air Force chimps, the chimpanzees used in the early days of space research, and their descendants, that inspired our late founder Dr. Carole Noon to establish Save the Chimps.

The U.S. Astronaut Hall of Fame opened in 1990 as a place where the accomplishments of astronauts are celebrated and showcased to the public. Located at Kennedy Space Center Visitor Complex, visitors get a glimpse into space flight through the world’s largest collection of personal astronaut memorabilia. Every year, AHOF honors a class of astronauts that have excelled in their accomplishments in space or in their contributions to the advancement of space exploration.

On January 31, 1961 Ham became the first chimpanzee in space. Ham’s flight lasted approximately 16 ½ minutes. He travelled at a speed of approximately 5800 mph, to a height of 157 miles above the earth. He experienced about 6 ½ minutes of weightlessness. Incredibly, despite the intense speed, g-forces, and weightlessness, Ham performed his tasks correctly. After the flight, Ham’s capsule splashed down 130 miles from its target, and began taking on water. It took several hours for a recovery ship to reach Ham, but miraculously he was alive and relatively calm considering his ordeal. When he was finally released from the “couch” however, his face bore an enormous grin. Although interpreted as a happy smile by many people, Ham’s expression was one of extreme fear and anxiety. That fear was demonstrated again sometime later through an act of defiance. Photographers wanted another shot of Ham in his “couch.” Ham refused to go back into it, and multiple adult men were unable to force him to do so.

On November 29, 1961 Enos became the second chimpanzee in space with a mission to orbit the Earth. During training for space flight, chimpanzees would be taught to follow cues to perform simple tasks, if they answered incorrectly, they would receive an electric shock to their feet. During his flight, the equipment malfunctioned and was Enos received shocks for responding to the cues correctly. Despite this, Enos continued to respond correctly, resulting in 76 electric shocks while in orbit.

By Rob Picheta, CNN The unique culture of nut-cracking chimpanzees has been selected for conservation by the UN, marking the [...]

From Save the Chimps Sanctuary When Tiffany the chimp was euthanized on the morning of August 16, 2018, it was [...]

By Organiclesson.com World Wildlife Day (March 3rd) presents an important opportunity for us to raise environmental awareness and to consider [...]