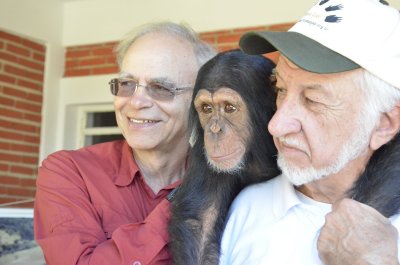 Twenty years ago, Peter Singer and Paola Cavalieri launched the world’s first Statement of Defence of the Rights of the Great Apes. The most recognized anthropologists, philosophers and biologists of the time signed the declaration . To consolidate that action, a book was published, edited by Peter and Paola, under the title The Great Ape Project, where the rights of the Great Apes were defended by all subscribers of that declaration, which figured prominently in the text .

That theoretical action turned into action months later, with the formation of GAP, the movement which Peter Singer was the main mentor. During the memorable visit he made at Sorocaba Great Apes Sanctuary, on August 29th, Peter was thrilled to say that he was seeing one of his dreams fulfilled .

A few people, including the most informed on environmental issues, knew that Peter Singer had created GAP Project and had been its President . One of the reasons that prompted us to make the meeting with him at the Sanctuary, with the presence of a selected group of environmentalists and animal rights advocates, was to show everyone that the principals of GAP are deep, solid and backed by the most advanced scientific minds of our world today .

Fourteen years ago, a little baby chimp came into our lives, transforming it as no one could ever imagine. One chimp, named Guga, gave rise to the Sorocaba Great Apes Sanctuary, which the philosopher Peter Singer has just visited. There he was welcomed with open arms by Suzi, Guga’s two-year old daughter, who threw herself in his arms as if she knew him all her life .

In this uninhibited and spontaneous gesture of thet little baby chimpanzee, Peter Singer saw that his initiative of 20 years ago was not in vain. It was not in his Australian land, or in United States, where the project emerged. But it was in a giant and far away country, owner of the greatest diversity of primates on the planet, where the prophecy that he reported in 1993 was materialized and someone, following his dream, created a home where the great apes, once exploited, tortured, wounded in spirit and body, manage to live in peace, with decency and love. A place where they can live without fear among their peers, having, for the first time, their rights as living beings, in this cruel and unfair world which led them to the brink of extinction .

We know that Peter Singer was very delighted when he saw one of his dreams translated into reality and he also saw that all is not lost. That there are human beings willing to fight all obstacles to defend the principles and inalienable rights of all living beings, regardless of their species and kind, on this planet we all inhabit .