The installations and structure of this sanctuary are inspired on British park The Monkey World, which turns it to be the more modern one in Brazil. Czech Republic couple Milan and Anita Starostik owned a big industrial corporation in Paraná and had already a private conservation area, due to their interest for animal protection. After they had sold their company, the couple started to dedicate in personal to the great primates and nowadays the sanctuary houses 18 chimpanzees, the majority rescued from Garcia circus. The enclosures have the most modern heating systems and a lot of toys in big areas – the elastic bed is the favorite of the guests. 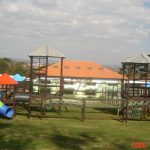 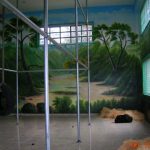 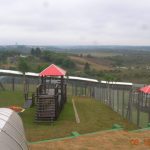 Our guests in Paraná He was born in June, 6th, 1996. He is the youngest of his group and has a Chinese face and innocent eyes that look for us asking for loving. He is very gentle and is totally integrated to the “Paulistas” group (the adult chimpanzees who came from Garcia circus). He was born on October, 16th, 1993. He arrived at the sanctuary in September, 27th, 2005, rescued from Portugal circus. In this circus he used to be confined in a trailer without any hygiene care. As a result, there were a lot of mistreating and abandon complaints to Ibama, which asked us for a place in the sanctuary for reallocate him. And then the rescue happened. Caique, an adult and strong male that people use to say that was aggressive and dangerous, came tied up with chains and was pulled by four men. We put him in a big enclosure near to the other chimpanzees. The little ones looked and investigated him with curiosity. In the beginning we offered him several fruits and coffee with milk, things that he was already used to take. Slowly he was gaining confidence and friendship for us. The chains were taken out of him, so he seemed to be a slave, and then a complete change happened. Today he is chimpanzee who weights, approximately, 90kg, kind and gentle, and plays in a 10000 square meters area together with his chimpanzees friends, without attacking or hurting anyone. He was born on September, 30th, 1991. He is very handsome, healthy and individualist. He likes to be separated and does not mix with the group. He barely goes out to the garden. Biito is a good friend and love sweets, mainly ice cream, and claps hands to get more. 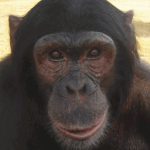 She was born in September 23rd, 1999. Carol arrived together with Lucas. She was a three-year old female, beautiful, kind and with good character. Milan took her to the enclosure where Johny and Matheus were and they hug each other and became friends. Carol did not find anything strange in the new home and since the very first moment she could not stop jumping and having fun with the others. During all these years she demonstrates strong personality and a lot of intelligence. She likes very much to prepare surprises, discovering or finding places where she can hide so we look for her. She is becoming a gracious young lady and she loves snacks. But she changes anything for Shirley’s lap, her keeper. He was born on May, 4th, 2003. His arrival was on October, 24th, 2004. He was weighting 7,8kg, was very thin, anemic and scared. In his former home he stayed in a small cage, where he was never able to develop his muscles. As a result, he arrived at the sanctuary in a hunchback state. After being examined by Dr. Rogerio, our vet, he started a treatment with medicine and physiotherapy sessions. We put him together with Lucas, both very young and willing to play. And as we expected, they got along very well. He is very spoiled both by the keepers and the other chimpanzees, as he is the youngest of the group. The chimpanzees take care and protect him and he takes advantage of that getting everything he wants. He has grown with health and with the freedom that could be conceded to him. This little one is the joy of the sanctuary. 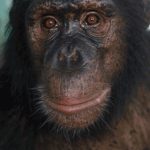 He was born in May, 20th, 2000 and was the first baby of Curitiba sanctuary. He arrived at Starostik couple house when he was five-month old. There a room with a bed for a baby was prepared to receive him. He used to take bath every two days and played with the toys, although he preferred the lap of his new human parents. When he was one year old he was transferred to the sanctuary, because the apartment was not appropriated to him. Today Johny is an intelligent and healthy teenager, is integrated to the other chimpanzees in a 10000 square-meters area that has a lot of toys so that they can exercise. As long as the time had gone by, he still likes very much loving and hugs. His favorite beverage is milk, which he asks for frequently clapping hands beside the kitchen. He was born in September, 11th, 2002. He arrived together with Carol on Carminha’s lap, his old keeper. In the beginning he would not get separated from her and grabbed her with all his force. But we began to please and little by little he was getting accustom. Lucas, Matheus and Carol are brothers and recognize each other in the moment they met. When he arrived, Lucas was thin, very scared and had a severe flu. His quiet and reserved behavior was the opposite of Matheus and Carol’s, who did not stop to play since the moment they arrived. But it did not take too long for him to be completely integrated with the others. Nowadays, even being totally integrated, he is very individualist. He likes to play alone and gets away in the moment of a dispute. Lucas is very beautiful and intelligent and we call him “Ramses”, with a deep look and a hug that is a reward. She was born in 1981. She is a docile female and has an elegant and lean appearance. She likes to walk in two feet, and not bended over two hands like the majority of the chimpanzees. She also had a lot of babies but had no opportunity to raise them, a reality that we intend to change in the sanctuary. She does not like to sleep in beds or nets and prefers to get several blankets to do a nest on the ground. She was born in September 24th,1993 and arrived at the sanctuary in February, 15th, 2007, coming from Garcia circus. After her arrival she was kept in quarantine and then was integrated to the group, without any problem. Maria is a very fat female for her age, but she is very well behaved and docile. Today she is the leader of the group, position gained with respect, without assaulting any one of her friends. Maria adapted quickly to the new environment. She runs, plays and has fun with the toys. We hope that her weight get reduced and reaches a proportional level.

He was born in August, 3rd, 2001. He arrived at the sanctuary in December, 18th,2002 and it was love at the first sight. Very active and with a white face, he looked like a porcelain doll wearing clothes and diapers. When we arrived in his new home we kept him separated from Johny, because we thought he could hurt him. But we were surprised in the day we put them together because, different from our prediction, the meeting resulted in a big and strong hug, showing a great friendship that lasts until nowadays. Matheus is very special and has always his piece of fabric on his back. He is a gentleman and does not fight with the others and obeys every request that people who take care of him do. For instance, he is the first one that enters in the bedroom at sleeping time. He was born in the end of 2007 and is son of Lucy and Charlie. He is the first baby that Lucy will be able to raise (the others were taken out of her in the circus). Since he was very young he demonstrates independence, yelling and trying to walk by himself. He was born in July, 27th, 1995. He is very rowdy and has a strong personality. He walks in two legs to show his height aiming to dominate the group. He likes human contact and to please someone he pulls a hair from his body and tries to “plant it” with saliva in the people with whom he has contact. He goes out to the garden and has fun with the other chimpanzees.

She was born in May, 26th, 1987 and arrived at the sanctuary together with Maria. We became too much worried with her because she was very stressed at her arrival. She did not go to the ground and looked everywhere, as she was afraid of any noise. She got out of her room just after a while. We gave her all the assistance she need and little by little she was gaining confidence. Today she is completely integrated to the group, which has eight members. She is very beautiful and likes to stay at the top of the enclosure toys observing everything. She asks for food beside the kitchen, especially juice, which she adores. She came from Paraíso Perdido Park, in Fortaleza, in February, 17th, 2006, after six months of battle-negotiation. After an airplane travel from Fortaleza to São Paulo followed by 36 hours in a special truck, Vitória arrived at the sanctuary very upset. She is different from the other chimpanzees and is very angry and temperamental, and yet a little wild. Nowadays she is completely integrated with the other chimpanzees and teaches them to open coconuts and other tips learnt with her chimpanzee family. She does not fight, but does not accept insults. She takes care of Dinho and always protects him. She loves yogurt and asks for it directly by approaching the fence. He has just arrived, on April 2009. For years he worked in a circus in a dangerous show, called Death Globe. Together with other motorbikers, he used to rode a bike and run inside the Globe. Yuri is the last chimpanzee rescued from circus, marking the end of this practice. He is a little bit bended over, as long as he used to live in a small cage. He is adapting quickly to the Sanctuary. He was born in December, 31st, 1993. He looks like exactly the same as Pedrinho, but he is much more loving. Zezinho likes to play with us, looks for little marks in hands and practices grooming with the other chimpanzees and his keepers. He also wants to be the dominant male

By Max Kendix “Don’t worry everyone, this is the last one on Singer”, our ethics professor announced last term. The [...]